WASHINGTON — A fed up President Donald Trump on Tuesday came out swinging against Democrats who continue to turn a blind eye to immigration loopholes.

“Democrats in Congress must vote to close the terrible loopholes at the Southern Border. If not, harsh measures will have to be taken!” the president tweeted.

The president’s comments were in response to congressional Democrats who continue to push back on his demands for emergency funds earmarked toward preventing illegal immigrants from entering the U.S. through the Mexican border.

“So you create chaos, and then ask for more money?” Rep. Katherine Clark, D-Mass., the vice chair of the House Democratic Caucus, told Politico, referring to the president’s request for emergency funding.

In an appearance on “Fox & Friends” Trump advisor Kellyanne Conway blasted Dems for their refusal to cooperate in helping to secure the nation’s border.

“They have to stop pretending they want to reform the immigration laws,” Conway said. “If they’re serious about immigration reform they should come to the table and fix something.”

“Not that we’re trying to validate or not validate [Trump’s claims], there are a lot of people there at the border,” Rep. Henry Cuellar, (D)-Texas, told Politico. “I don’t call it a security crisis, I call it a humanitarian crisis. So, the question is how do we get to address that?”

Trump’s efforts to secure the nation’s border has been an ongoing battle throughout his administration. The fight against illegal immigration was a center point of his 2016 election campaign. The issue is expected to remain the focus of his 2020 bid for reelection. 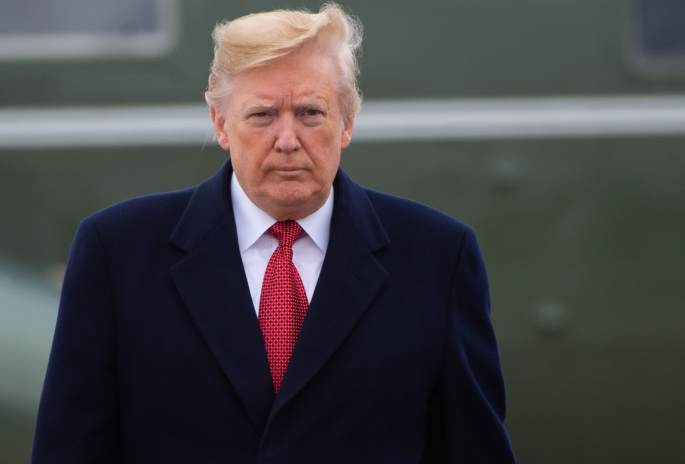 WASHINGTON, D.C. — Supreme Court nominee Brett Kavanaugh on Monday denied allegations made by a woman who claims he sexually assaulted her while at a high school party in the 1980’s.

“This is a completely false allegation. I have never done anything like what the accuser describes—to her or to anyone,” Kavanaugh said in the statement Monday. “Because this never happened, I had no idea who was making the accusation until she identified herself yesterday. I am willing to talk to the Senate Judiciary Committee in any way the Committee deems appropriate to refute this false allegation, from 36 years ago, and defend my integrity.”

Kavanaugh, who was nominated by President Donald Trump to fill Justice Anthony M. Kennedy’s seat on the Supreme Court, also visited the White House on Monday for a closed-door meeting with the president on the matter.

Kavanaugh’s accuser, Christine Blasey Ford, is standing firm in her allegations against him, however, and is willing to testify before Congress if asked, Ford’s attorney, Debra Katz, told reporters Monday.

In a letter published by CNN and sent to Senator Dianne Feinstein, (D)-Calif, Ford claimed: “Brett Kavanaugh physically and sexually assaulted me during high school in the early 1980s.”

“The assault occurred in a suburban Maryland area home at a gathering that included me and four others,” Ford wrote. “Kavanaugh physically pushed me into a bedroom as I was headed for a bathroom up a short stair well from the living room. They locked the door and played loud music precluding any successful attempt to yell for help.”

“She clearly considers this an attempted rape,” Katz said Monday. “She believes that if it were not for the severe intoxication of Kavanaugh, she would have been raped.”

Kavanaugh, in a statement last week, said he has nothing to hide and too is willing to testify under oath on the matter.

“I did not do this back in high school or at any time,” Kavanaugh said, adding that he “categorically and unequivocally” denies the allegations that have been made against him.

So far the White House has not made any determination as to whether or not the president will revoke Kavanaugh’s nomination, but issued a statement on Monday that Ford “deserves to be heard”.

“This woman should not be insulted and she should not be ignored. I think the Senate is headed toward a reasonable approach, allowing this woman to be heard in sworn testimony, allowing Judge Kavanaugh to be heard in sworn testimony,” White House Counselor Kellyanne Conway, told “Fox & Friends” Monday. “I spoke with the president, I spoke with Senator [Lindsey] Graham and others. This woman will be heard.”

WASHINGTON, D.C. — The Trump administration has drawn a red line in the sand when it comes to demands from Democrats regarding DACA. No wall? No DACA. It’s that simple.

Appearing on Fox News‏ Channel’s “America’s Newsroom,” White House aide Kellyanne Conway said President Donald Trump has made it very clear to Democrats there would be “no DACA without funding for the wall.”

“This president won in part on taking a tough stand against illegal immigrants just coming over the border,” said Conway. “People want to know that our borders are secure, and this president has a 70-point immigration plan. I know people on the left want to boil it down to DACA and DACA alone. He put out a 70-point immigration plan. Read it. it is there for you to see and transparent.”

“The president has made very clear, and he hasn’t wavered that there is no DACA without funding for the wall, Conway continued. “The wall is to be built. He made that promise. It has begun and very important for folks to see tangibly that we are getting tougher on border security. The president has also made very clear his immigration vision includes an end to chain migration, an end to the visa lottery program and more ICA agents, immigration and border patrol agents at the border so that the men and women there who bravely do their work every day have more support and resources. He has talked about a merit-based immigration system. So it’s a very comprehensive plan that people should look at and not boil it down to just DACA. Democrats know how he feels about this.”

The president’s touch stance on the issue follows an end of year meeting between Senate Minority Leader Chuck Schumer of New York and House Minority Leader Nancy Pelosi of California which took place in late December in which the pair demanded that President Trump protect the Obama-era program that allows children brought to the US illegally to stay in the country.

The president, however, who campaigned heavily on a promise to build a secured border wall dividing the United States from Mexico, said he refuses to grant demands on DACA until full funding is approved to build the wall.

In September of 2017, Trump ended the Deferred Action for Childhood Arrivals program, permitting a six-month delay to allow Congress to pass legislation protecting those who had arrived in the U.S. as children.

Congressional Republicans have said they would support some form of legislation to protect so called “Dreamers”, but would want it paired with tighter border security measures. 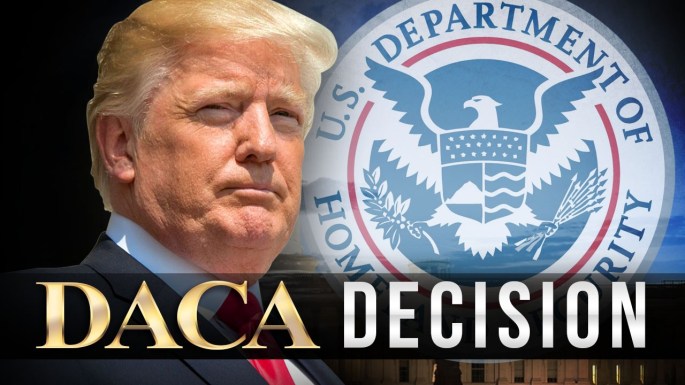 ATLANTA, GA — After months of negative coverage of the Trump administration, tensions hit a fever pitch on Monday as Trump aide Kellyann Conway and CNN host Chris Quomo paired off over what Conway called the network’s “fake news” coverage on Russia.

Appearing on CNN’s “New Day”, the pair sparred bitterly over a report that Donald Trump Jr., accompanied by then-campaign chair Paul Manafort, and Trump Sr.’s son-in-law Jared Kushner met with a Russian lawyer linked to the Kremlin in the hopes of obtaining “dirt” on Trump’s then Democratic rival Hillary Clinton (https://www.youtube.com/watch?v=l9xfHC0ACX4).

After a series of questions in which Quomo hinted that the revelations proved that Trump had colluded with Russia to influence the outcome of the 2016 election, Conway lost her cool with the left leaning correspondent, asking him how he could live with himself.

“Aren’t you the least bit reluctant, if not embarrassed that you now talk about Russia more than you talk about America? Doesn’t this bother you?”

“No Kellyanne, this matters,” Quomo retorted.

After being interrupted by Quomo several times as she tried in vain to defend the President and his administration, Conway shouted her way over top of Quomo’s further attempts to silence her and stated her piece.

“Chris, you were just — okay. Listen. You were just able to speak two minutes uninterrupted, and I frankly think it was more punditry than reporting. So I would like to respond. If we were in court, your side would not even survive a motion to dismiss because you’ve got nothing”, said Conway.

“On this one, Don Jr. Has very clearly said he was told that there would be some kind of information helpful to the campaign. It quickly became very apparent there was not. Let me say something about who goes into these meetings in the Trump campaign. We were a very small operation. I was not involved in June. I was involved in July. And became the campaign manager in August. It’s very typical to have principals in the meeting.

We had a fraction of the staff than Clinton had over there. You’re trying to have your viewers think because these three principals were in there, it was viewed as some type of seriousness that simply is not true. This was standard operating procedure for the campaign.”

“You don’t care if Russia was trying to get inside your campaign to affect the election?” Quomo countered

Conway replied, “You don’t know what I care about. Why don’t you ask me?”

“I admire your moxie, sitting there with the CNN chyron right near you, talking about credibility issues, given the couple weeks you guy have had,” snapped Conway, taking a stab at the network’s recent highly publicized issues with credibility.

“I could not be more proud to have that CNN chyron next to me,” Cuomo told her. “And I could be more proud representing the White House here on CNN,’ Conway responded.”

“You wanted to produce something because you’re invested in months now as a network in something that simply doesn’t exist,” Conway added, attempting to tie the Trump, Jr. story in with a host of other Russian collusion stories CNN has ran in recent months that have not panned out.

“No, that’s an assumption by you. And it’s an unfair premise,” countered Cuomo.

“No, Chris. That’s not true,” Conway pushed back. “Here is the unfair premise, that we are talking about this again. Yet again. That you talk about Russia more than you talk about America. That the big bombshell of the day is Jim Comey having classified information, conversations with the President of the United States, in his memorandum” (https://rebekahworsham.org/2017/07/10/thats-so-illegal-trump-accuses-comey-of-leaking-classified-info/).

Conway took to Twitter shortly after the interview ended to vent her disdain for the CNN host.

Comey may now himself be the subject of a congressional probe as investigators seek to determine whether or not he mishandled classified information.