HARTFORD, Conn. — Radio show personality Alex Jones has been ordered to pay an additional $473 million in punitive damages for stating on air his beliefs that the 2012 Sandy Hook school shooting was a government orchestrated hoax.

The ruling came down Thursday by Connecticut Judge Barabara Bellis who ordered Jones to pay the sum in addition to a nearly $1 billion jury verdict issued last month.

The Infowars host was sued by an FBI agent and Sandy Hook victims’ families over his claims that the mass shooting, in which 20 first graders and six personnel were killed, was staged by “crisis actors” to justify stricter gun control laws.

Jones has since doubled down on his claims that the case against him was a “witch hunt” and that the suit violated his Constitutional right to free speech.

Jones’ company, Free Speech Systems, which is also named in the suit, is seeking bankruptcy protection.

The Safeguarding Americans from Coronavirus and Religious Exercise Discrimination (SACRED) Act would penalize the states and localities that Attorney General William Barr determines are targeting people of faith with religious discrimination.

“Throughout this pandemic we’ve seen numerous examples of state and local governments instituting discriminatory regulations that unfairly target people of faith and which restrict houses of worship from operating while exempting secular gatherings and operations from the same rules,” Cruz said in a statement.

Since the Coronavirus outbreak, Cruz has been a strong opponent of any legislation that infringes upon the right of citizens to worship freely in their chosen place of worship, warning of the slippery slope that such actions could lead to and the importance of protecting religious freedoms.

“As Congress continues to provide relief funds to combat the impact of COVID-19, it is crucial that we protect the First Amendment right of religious liberty from discrimination,” Cruz’s statement continued. “That’s why I’ve introduced the SACRED Act. By blocking funds from governments that discriminate against religious organizations, we can fairly protect religious liberty and the rights of those who seek to gather together safely for worship.”

“The flat prohibition against 10 or more persons gathering for in-person worship services — regardless of whether they maintain social-distancing guidelines — impermissibly treats religious and nonreligious organizations unequally,” U.S. Attorney for the District of Nevada Nicholas Trutanich and Assistant Attorney General Eric Dreiband warned in a letter to Nevada Gov. Steve Sisolak, a registered Democrat.

“These directives may violate the Free Exercise Clause of the First Amendment, unless the government can prove a compelling interest and pursued the least restrictive means possible,” the letter continued, calling on Sisolak to address “unequal treatment of places of worship.”

Sisolak initiated the ban the week of Easter Sunday, claiming reports that religious services in other states had spurred isolated corona virus outbreaks in late March and early April.

The move by Barr’s Justice Department follows President Donald Trump’s declaration on Friday that faith gatherings would be deemed “essential” during the coronavirus pandemic.

“The governors need to do the right thing and allow these very important essential places of faith to open right now – for this weekend,” Trump said. “If they don’t do it, I will override the governors,” the president warned. “In America, we need more prayer, not less.”

WASHINGTON — The Trump administration on Wednesday pushed back against criticism its received over President Trump’s decision to revoke CNN journalist Jim Acosta’s “hard pass” to cover White House press briefings, saying it has “broad discretion” to regulate who attends such press events.

In a legal filing ahead of a Wednesday hearing on CNN’s request for a temporary restraining order to restore Acosta’s access, the attorneys for the Trump administration argued it “was lawful” to revoke Acosta’s pass in light of his behavior during a heated exchange between he and President Trump during a press conference last week.

But twelve news organizations, including Fox News and The Associated Press, joined forces to file an amicus brief in the case Wednesday, claiming the Trump administration revocation of Acosta’s press pass represented a danger to the First Amendment.

“Whether the news of the day concerns national security, the economy, or the environment, reporters covering the White House must remain free to ask questions. It is imperative that independent journalists have access to the President and his activities, and that journalists are not barred for arbitrary reasons,” a representative from the law firm Ballard Spahr said in a statement on behalf of the news outlets.

In a startling break from its typical support of Trump, Fox News President Jay Wallace said that Secret Service passes for working White House journalists “should never be weaponized.”

“Fox News supports CNN in its legal effort to regain its White House reporter’s press credential. We intend to file an amicus brief with the U.S. District Court. Secret Service passes for working White House journalists should never be weaponized. While we don’t condone the growing antagonistic tone by both the president and the press at recent media avails, we do support a free press, access and open exchanges for the American people,” Wallace said in a statement.

“This is just more grandstanding from CNN, and we will vigorously defend against this lawsuit,” Sanders said. “CNN, who has nearly 50 additional hard pass holders, and Mr. Acosta is no more or less special than any other media outlet or reporter with respect to the First Amendment. After Mr. Acosta asked the President two questions — each of which the President answered — he physically refused to surrender a White House microphone to an intern, so that other reporters might ask their questions. This was not the first time this reporter has inappropriately refused to yield to other reporters.”

“We continue to urge the administration to reverse course and fully reinstate CNN’s correspondent,” WHCA President Olivier Knox said. “The President of the United States should not be in the business of arbitrarily picking the men and women who cover him.” 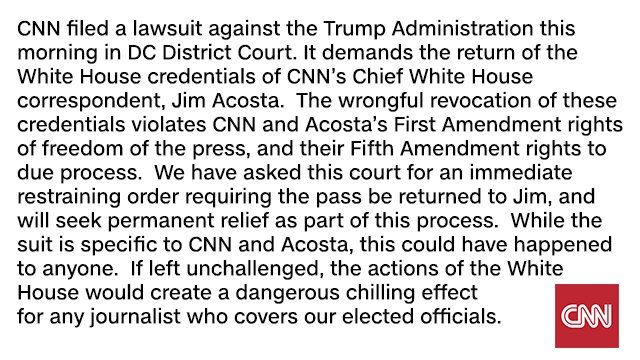 Washington, D.C. — The Supreme Court on Tuesday ruled in favor of pro-life pregnancy centers affirming that a California law passed in 2015, which requires the centers to inform clients about free or low-cost abortion services, violates the centers’ First Amendment rights to free speech.

In the 5-4 ruling, the court invalidated the California law, putting in peril similar laws on the books in Hawaii and Illinois.

The Golden State law, which targeted centers that provide abortion alternative counseling, mandated that such centers prominently post information on how to obtain abortion and contraception.

Centers that failed to comply with the law were fined $500 for a first offense and $1,000 for each subsequent offense, under California law.

Pro-life groups fiercely challenged the regulations, arguing that they violated their free speech rights under the First Amendment. The court concurred. The 9th Circuit Court of Appeals had previously rejected that argument.

“California cannot co-opt the licensed facilities to deliver its message for it,” Justice Clarence Thomas said in his majority opinion, referring to the regulations as “unjustified and unduly burdensome.”

“When it comes to making their health decisions, all California women — regardless of their economic background or zip code — deserve access to critical and non-biased information to make their own informed decisions,” Becerra said in a statement.

“Today’s Court ruling is unfortunate, but our work to ensure that Californians receive accurate information about their healthcare options will continue.” 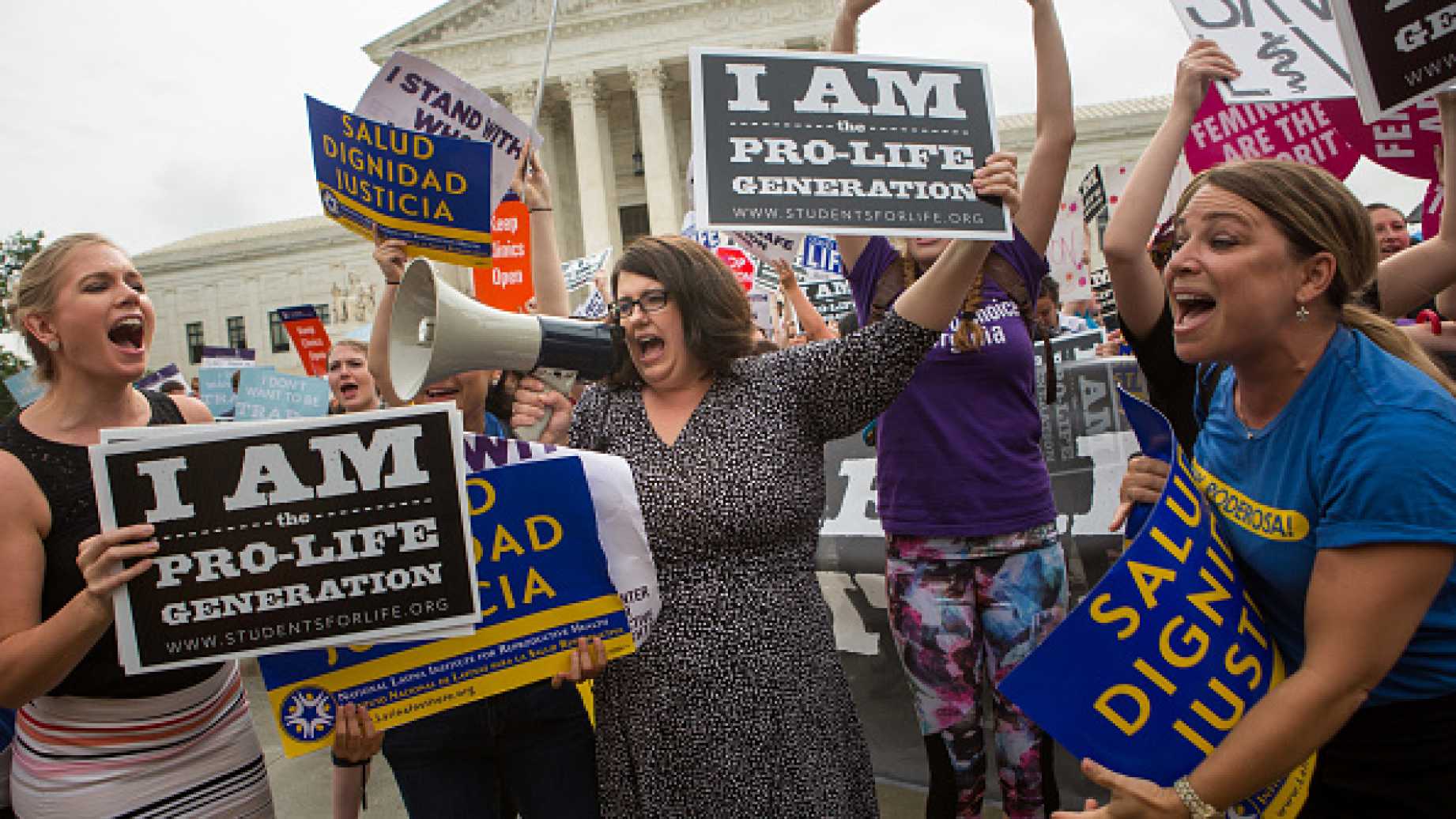 Coconut Creek, Fla. — A veteran police officer who made comments criticizing anti-gun activist David Hogg will be suspended from his job without pay for 5 days and undergo sensitivity training, the city’s police chief told CBS 4 News.

Brian Valenti of the Coconut Creek Police Department, called out Hogg in a Facebook post over last week’s “die-in” protest at Publix organized by survivors of the Stoneman Douglas shooting, saying maybe an old woman would “lose control of her car” and strike Hogg on his way out of the protest.

“When we are on or off duty we have a special role in our community and he understands that,” Arenal said. “He is extremely remorseful and is very embarrassed by the situation.”

Arenal said there were calls to fire Valenti — mostly from people out of state — but due to Valenti’s 23 year time on the job and his issuance of a public apology, Arenal felt a 5-day suspension without pay and “sensitivity” training served as sufficient punishment.

“If we felt in any way, shape or form that this was an actual threat against people, with an intent to carry it out, obviously that would be a completely different set of circumstances,” Arenal said. “There’s just nothing worse that could happen than to create a perception that out officers have any ill will towards these kids.”

Rod Skirvin, a union representative for the Coconut Creek Police, told CBS 4 News that Valenti deeply regrets his public comments and thought his post was being shared on a private forum.

““He’s distraught over the fact that he’s brought embarrassment to the department, the city, police in general,” Skirven said.

Skirven says Valenti has received multiple death threats and has offered to apologize again publicly to anyone he may have offended.