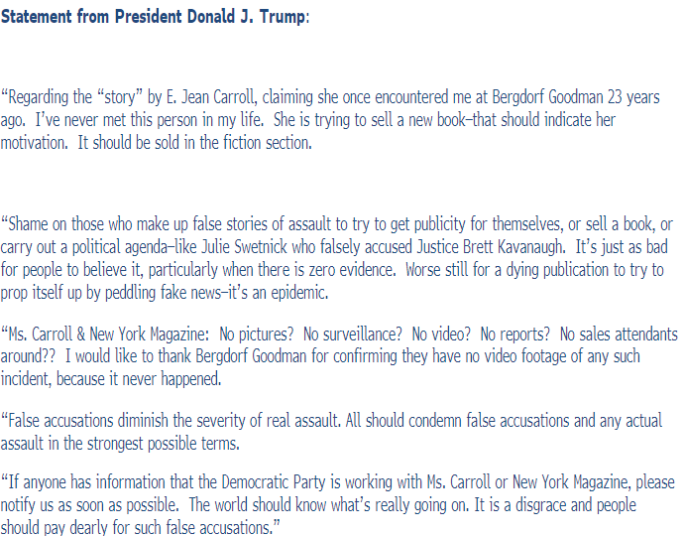 WASHINGTON — President Donald Trump on Friday vehemently denied allegations that he sexually assaulted writer E. Jean Carroll after the advice columnist accused the president of raping her in a department store dressing room back in the 1990’s.

“If anyone has information that the Democratic Party is working with Ms. Carroll or New York Magazine, please notify us as soon as possible,” he continued. “The world should know what’s really going on. It is a disgrace and people should pay dearly for such false accusations.”

Carroll, who made the allegations in an interview with New York Magazine, said Trump attacked her out of nowhere and that she was helpless to stop his advances.

“The moment the dressing-room door is closed, he lunges at me, pushes me against the wall, hitting my head quite badly, and puts his mouth against my lips. I am so shocked I shove him back and start laughing again,” Carroll claimed. “He seizes both my arms and pushes me up against the wall a second time, and, as I become aware of how large he is, he holds me against the wall with his shoulder and jams his hand under my coat dress and pulls down my tights.”

The president, however, says the allegations were timed in an effort to boost sales for Carroll’s new book, and claimed he has “never met her in my life.”

“She is trying to sell a new book—that should indicate her motivation. It should be sold in the fiction section,” he said.

“Shame on those who make up false stories of assault to try to get any publicity for themselves, or sell a book, or carry out a political agenda—like Julie Swetnick who falsely accused Justice Brett Kavanaugh. It’s just as bad for people to believe it, particularly when there is zero evidence.”