“I am pleased to announce that our bipartisan, bicameral negotiations on defense spending and other priorities have yielded a significant agreement,” Senate Majority Leader Mitch McConnell said in an announcement on the House floor. “The compromise we’ve reached will ensure for the first time in years our armed forces will have more of the resources they need to keep them safe.”

If passed, the two-year budget deal would boost military and non-defense budgets by $300 billion and clear the way for more than $80 billion in disaster relief, with roughly $160 billion dedicated to Pentagon spending and another $128 billion toward non-defense government programs.

Less enthusiastic than McConnel, Senate Democratic Leader Chuck Schumer said of the agreement, “We have reached a budget deal that neither side loves, but both sides can be proud of.”

The agreement would also include disaster relief for areas stricken by natural disasters and impose a four-year extension of the Children’s Health Insurance Program (CHIP). A $6 billion budget for opioid treatment is also factored into the bill as is $20 billion to be set aside for infrastructure.

Just prior to the proposed legislation being formally made public, House Democratic Leader Nancy Pelosi announced she will vote to prevent it’s passage if the deal isn’t revised to include funding for DACA.

The House passed a short-term spending bill Tuesday, which was aimed at keeping the government operational until a budget deal could be made. That bill also included a full-year of funding for defense spending, which both parties agreed was necessary.

WASHINGTON, D.C. — Kentucky Senator Rand Paul announced Tuesday that he will refuse to back a spending bill that, if passed, would provide the funds needed to allow the federal government to continue operation without shutting down.

“I cannot in good conscience vote to add more to the already massive $20 trillion debt. I promised Kentucky to vote against reckless, deficit spending and I will do just that,” Paul said in a tweet (https://twitter.com/RandPaul/status/940639780911665153?ref_src=twsrc%5Etfw&ref_url=https%3A%2F%2Ftownhall.com%2Ftipsheet%2Fleahbarkoukis%2F2017%2F12%2F12%2Fpaul-explains-vote-spending-bill-n2421559).

“The end-of-the-year spending bill will continue spending money like there’s no tomorrow,” Paul said in a video accompanying the tweet in which he criticises the proposed legislation.

Paul’s comments come after lawmakers last week approved a two-week spending bill to temporarily sustain the operation of government, but the Congressional budget office says a long-term spending bill is required in order to keep the federal government operating beyond December 22.

A previous analysis of the proposed legislation (http://thehill.com/policy/finance/362649-jct-says-senate-tax-bill-will-add-1t-to-deficits-even-with-growth) estimated that, should the bill pass, it would add roughly $1 trillion to the national deficit over the course of the next decade.

Paul, who voted in favor of the Republican tax bill last month, said the two pieces of legislation are as different as night and day.

“Tax cuts — people keeping more of their money — are never the problem, Paul said in a follow-up tweet. “The problem is spending. We should obey our rules, stop the deficit spending, and shrink government.” 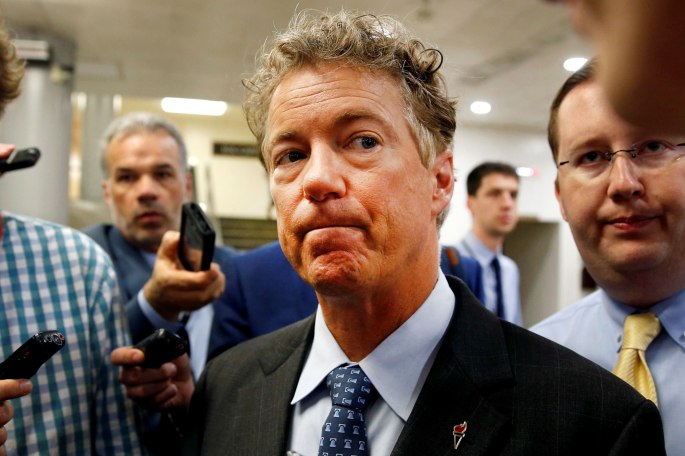 WASHINGTON, D.C. — The White House on Tuesday stepped up their defense of the president’s newly unveiled budget plan amid attacks from Democrats that the plan will hurt the nation’s poor.

Democrats say the $4.1 trillion budget proposal, titled “A New Foundation for American Greatness,” cuts too deeply into programs such as welfare and disability funding and will result in undue suffering for America’s needy.

“There’s not a single thing [cut] from Social Security or Medicare,” Mulvaney said during a press conference at the White House. “Why? Because that’s what he promised.”

When challenged on what impact the budget plan will have on funding for Medicaid and food stamp programs, Mulvaney said Republicans see the budget opportunity with a different set of eyes than Democrats.

“Everything that we do in this administration, every single time I am called into the Oval Office … the focus is sustained 3% economic growth,” he said, arguing that the president and his administration “reject(s) that pessimism” that the economy can’t sustain that amount of growth each year.

The budget proposal was sent to Congress on Tuesday, but even before the plan was released, Democrats had come out swinging against it.

“Eliminating domestic programs is unconscionable,” said New York Rep. Joe Crowley, who as leader of the House Democratic Caucus says he and his colleagues will use the “terrible” plan to regain majority in 2018.

Senate Minority Leader Chuck Schumer was also quick to lay into the plan.

“The Trump budget takes a sledgehammer to the middle class and the working poor, lavishes tax breaks on the wealthy and imagines all of the deficit problems away with fantasy math,” Schumer said Tuesday on the Senate floor.

But by an overwhelming margin, Republicans praised Trump’s economic plan as a new fiscal day in America.

“We can finally turn the page on the Obama era of bloated budgets that never balance,” House Speaker Paul Ryan, R-Wis., said of the proposed budget. “President Trump has proven his commitment to fiscal responsibility with a budget that … prioritizes American taxpayers over bureaucrats in Washington.”

WASHINGTON, D.C. — President Donald Trump on Tuesday defended a $1.1 trillion deal as Republicans lashed back over some of the bill’s most controversial compromises.

The bill, which affords funding to Democratic sponsored programs such as Planned Parenthood, does not include funding to programs deemed priorities by Republicans, such as financing to begin construction of a border wall between the U.S. and Mexico, a promise that Trump famously campaigned upon. The bill also provides continued federal funding to so called “sanctuary cities”, a fact that has conservatives outraged.

The president took to Twitter to defend the spending bill, claiming that compromises were necessary in order to avert a government shutdown.

“The reason for the plan negotiated between the Republicans and Democrats is that we need 60 votes in the Senate which are not there!” Trump tweeted, calling for voters to elect more Republican senators in 2018 “or change the rules” of the Senate filibuster. “Our country needs a good ‘shutdown’ in September to fix mess!” he added.

Heritage Action, an organization that promotes conservative causes, blasted the spending bill on Tuesday (https://heritageaction.com/sentinel-professionals/massive-spending-bill-fails-meet-conservative-priorities-2/), claiming the bill “woefully fails the test of fiscal responsibility and does not advance important conservative policies.”

Even mega Trump supporter Rush Limbaugh slammed the proposed legislation during his radio show on Monday, calling out the priorities of the Trump administration in the process.

“Why is anybody voting Republican, if this is what happens when we win?” Limbaugh added.

Conservative commentator Charles Krauthammer echoed Limbaugh’s sentiments during an interview on Monday’s Fox News. “This is a total loss,” Krauthammer said of the bill.

However, backers of the bill say the president has done his best to compromise in an effort to avoid a government blackout, arguing the deal provides an additional $15 billion for defense spending and a $1.5 billion spending increase for border security.

“The hard fact is in the Senate, Trump is going to have to eight votes from the Democrats to bring this spending bill across the finish line,” Rep. Tom Rice (R-SC) of the Ways and Means Committee told Fox News. Rice also noted that the border adjustment tax, which the Trump administration has deemed a priority, remains “on the table.”

A final vote on the bill is expected later this week. 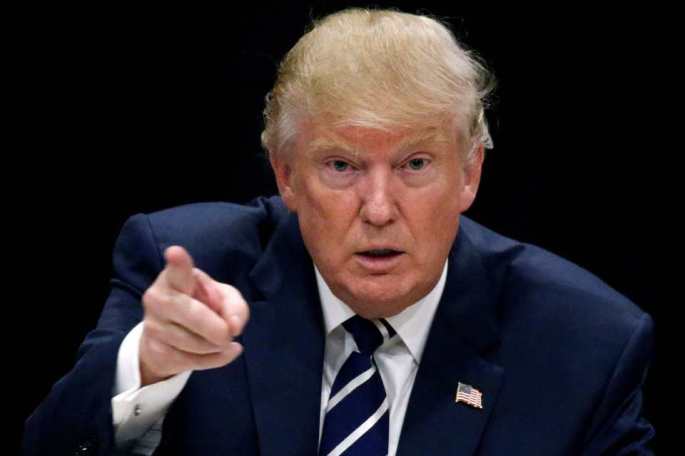 WASHINGTON, D.C. — The Trump administration on Wednesday is expected to release details on what Treasury Secretary Steve Mnuchin called “the biggest tax cut” in US history, according to a White House spokesperson.

The plan is expected to include huge tax cuts for businesses and a significant tax burden reduction for the middle class.

“It’s a great plan,” said the president during a briefing at the White House. “It’s going to put people back to work.”

Speaking at an event sponsored by The Hill on Wednesday, Mnuchin said Trump’s plan would include reducing the current corporate tax rate of 35% down to 15%, a whopping 20% cut.

”What this is not going to be is a loophole to let rich people cash in,” said Mnuchin. “The 15 percent corporate rate was always non-negotiable for the president.”

For the middle class, the proposed plan involves dropping the existing seven income-tax rates to just three and cutting the individual top rate from 39.6% down to 35. The plan also calls for the ending of the a 3.8 % net investment income tax that applies to individuals earning more than $200,000 a year, repealing of the alternative minimum tax and elimination of the estate tax, which currently applies to estates worth more than $5.49 million for individuals and $10.98 million for couples.

On the flip side, the plan would eliminate the federal income-tax deductions that are currently allowed for state and local taxes — a provision which critics say would hit high salary earners in mega-tax states such as New York and New Jersey. Itemized deductions such as home mortgage interest and charitable contributions will still be deductible under the plan, however, and will have little to no impact on the middle class.

In a statement on Wednesday, National Economic Council Director Gary Cohn described the proposal as “The most significant tax reform legislation since 1986 and one of the biggest tax cuts in American history.”

When challenged on how the president plans to fund the tax cuts, Cohn said the jobs created by industries who are able to hire more employees as a result of the tax breaks would likely stimulate enough economic growth to cover the cost. 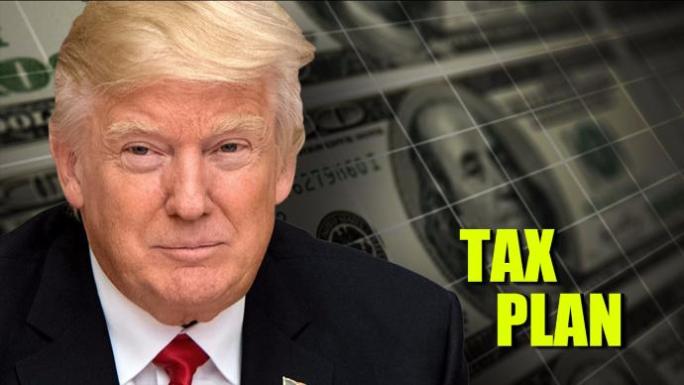