WASHINGTON — President Donald Trump on Wednesday met with Democratic and Republican leaders in another failed effort to resolve the ongoing government shutdown.

During a Cabinet meeting at the White House, his first public appearance of the new year, Trump said the shutdown will last “as long as it takes” as he works to convince Democrats to approve a $5 billion budget bill to fund a wall between the United States and Mexico.

“Could be a long time or could be quickly,” he told reporters.

The president’s comments come as the country entered it’s the 12th day of a partial shutdown, resulting from the Democrats’ refusal to fund the wall, which the president insists is a matter of national security.

Saying the current border is “like a sieve”, Trump said tougher security at the wall is essential in deterring the flow of illegal immigration.

“If they knew they couldn’t come through, they wouldn’t even start,” Trump said at the meeting, joined by Cabinet secretaries and several of his top advisers, including Jared Kushner and Ivanka Trump.

In a jab at House Democratic leader Nancy Pelosi, who spent the holiday break vacationing at a luxury resort in Hawaii, Trump complained that he had been “lonely” at the White House, having skipped his getaway to Mar-a-Lago in Florida to work instead on securing the nation’s border. He said his only companions during that time were the “machine gunners,” referring to security personnel, adding “they don’t wave, they don’t smile.”

In response, Pelosi blamed Trump for the ongoing shutdown, claiming that the president is the one who is refusing to cooperate.

“We are giving the Republicans the opportunity to take yes for an answer,” she wrote in a letter to colleagues of the Democrats’ plan to “end the Trump Shutdown” by passing legislation Thursday to reopen the government.

“Senate Republicans have already supported this legislation,” Pelosi wrote, “and if they reject it now, they will be fully complicit in chaos and destruction of the President’s third shutdown of his term.” 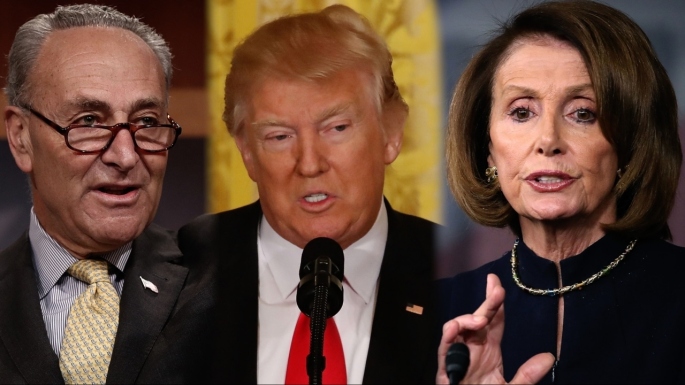 One thought on “TRUMP MEETS DEMS IN BORDER SHOWDOWN: Says government shutdown ‘could be a long time’”