WASHINGTON — President Donald Trump on Monday warned Mexican officials to send migrants massed in Tijuana and threatening to crash the U.S. border “back to their countries” or face a permanent closure of the border.

“Mexico should move the flag waving Migrants, many of whom are stone cold criminals, back to their countries,” the president tweeted. “Do it by plane, do it by bus, do it anyway you want, but they are NOT coming into the U.S.A. We will close the Border permanently if need be. Congress, fund the WALL!”

The president’s comments come in response to a wave of backlash from left-leaning news agencies and political pundits who criticized Trump’s authorization of tear gas use on migrants who stormed the border.

U.S. Customs and Border Protection (CBP) said it suspended northbound and southbound crossings for both pedestrians and vehicles at the San Ysidro port of entry at the president’s order.

A CBP spokesperson added that some demonstrators “attempted to illegally enter the U.S. through both the northbound and southbound vehicle lanes at the port of entry itself. Those persons were stopped and turned back to Mexico.”

U.S. border agents confirmed Monday that they had shot several rounds of tear gas at migrants who began throwing rocks at U.S. authorities and who had attempted to break through secured points along the border.

Homeland Security Secretary Kirstjen Nielsen also confirmed through a statement that some migrants “attempted to breach legacy fence infrastructure along the border and sought to harm CBP personnel by throwing projectiles at them.

“As I have continually stated, DHS will not tolerate this type of lawlessness and will not hesitate to shut down ports of entry for security and public safety reasons,” Nielsen said. “We will also seek to prosecute to the fullest extent of the law anyone who destroys federal property, endangers our frontline operators, or violates our nation’s sovereignty.”

President Trump has characterized the vast majority of asylum claims as fraudulent and said use of deady force would be authorized if necessary to secure the U.S. southern border. 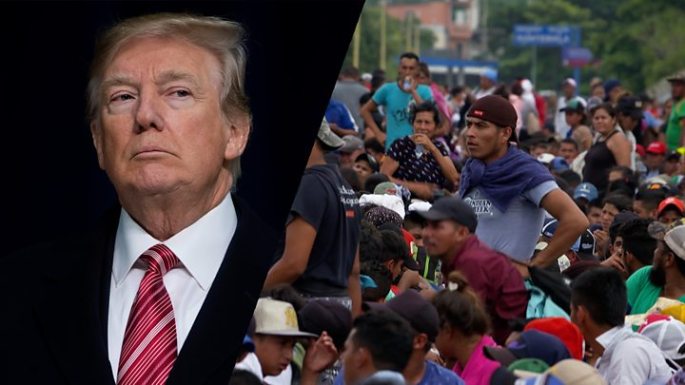