Vatican City — In a private meeting, Pope Francis reportedly told Juan Carlos Cruz, a gay man who was victimized as a child by a Catholic priest, that “it’s fine to be homosexual”.

The comments were said to have been made by the Pontiff during a closed-door meeting with Cruz, as the men discussed the sexual abuse Cruz endured at the hands of pedophile priest Fernando Karadima, who was found guilty of sexual abuse by the Vatican in 2011.

Speaking to Spanish newspaper El País, Cruz said: “He [the Pope] told me, ‘Juan Carlos, that you are gay does not matter.

“The pope loves you like this. You have to be happy with who you are.”

The Pope’s alleged comments sparked a nearly immediate outcry from Catholics on social media based on the fact that Catholic teaching condemns homosexual acts as gravely immoral.

“Pope Francis is a false prophet. Gods words do not change. Pope Francis is NOT God,” a Twitter user going by the handle Trinity Rosewink tweeted of the controversy.

“He’s a liberal and that’s his ideology. What does God’s written word say?” a commenter by the name of Michael Magumba wrote on Facebook.

This is not the first time that Pope Francis has turned his cheek against traditional Catholic teachings.

In July 2013, when responding to a reporter’s question about the existence of an alleged “gay lobby” within the Vatican, Pope Francis said: “If a person is gay and seeks God and has good will, who am I to judge?”

The leader of the Catholic church also created controversy in April when he said there was no such place as an actual hell.

“They are not punished,” the Pontiff was quoted as having said of sinners. “Those who repent obtain God’s forgiveness and take their place among the ranks of those who contemplate him, but those who do not repent and cannot be forgiven disappear. A hell doesn’t exist, the disappearance of sinning souls exists.” 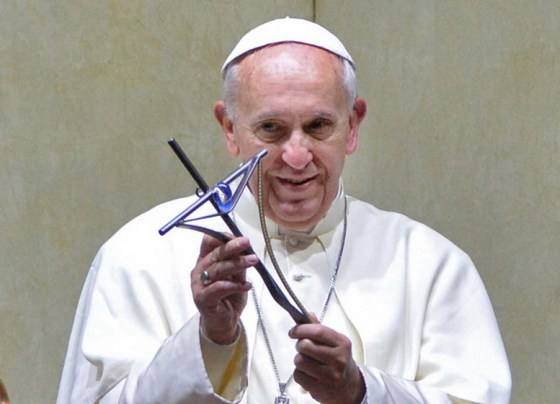