Washington, D.C. — Arizona Senator John McCain is telling all in a new book about his life in politics, “The Restless Wave”.

In one of the most shocking chapters of the book, McCain writes that he once feared for his life after a night of downing vodka with former Democratic presidential candidate Hillary Clinton.

According to McCain, 81, the “wild night of partying” occurred when he traveled to Iraq and Afghanistan in February of 2005 with Clinton, South Carolina Senator Lindsey Graham, and a few other colleagues.

“This was a trip that saw a pleasant evening’s repast become an urban legend that recounted a vodka-drinking competition she and I are alleged to have had in Tallinn,” McCain begins the story.

“I don’t drink very much, and I never have. I have one or two drinks on the weekend or when I’m out to dinner with friends, and my drink of choice is vodka,” McCain admits.

But, “we did go out to dinner in Talinn….and we did have vodka”.

After multiple rounds, McCain says he had difficulty in carrying out his official duties the following day.

“After twenty minutes, I was struggling to stay awake,” McCain writes. ” I turned to my aide, Richard Fontaine, and whispered that I thought I was going to die, and asked him to figure out some way to get us out of here.”

McCain’s revelations follow an admission by Clinton that she often hit the bottle for comfort after losing the 2016 presidential election to Republican challenger Donald Trump.

“Look, I took a lot of walks in the woods, I spent a lot of time cleaning closets and playing with my dogs, I drank my fair share of Chardonnay,” Clinton told “Tonight Show” host Jimmy Fallon. “I did what I thought would help.”

And in a recent tell-all, politics reporter Amy Chozick also claimed that had Clinton won, she would have been the “booziest” President since FDR.

“The Restless Wave” is due to hit store bookshelves on May 22. 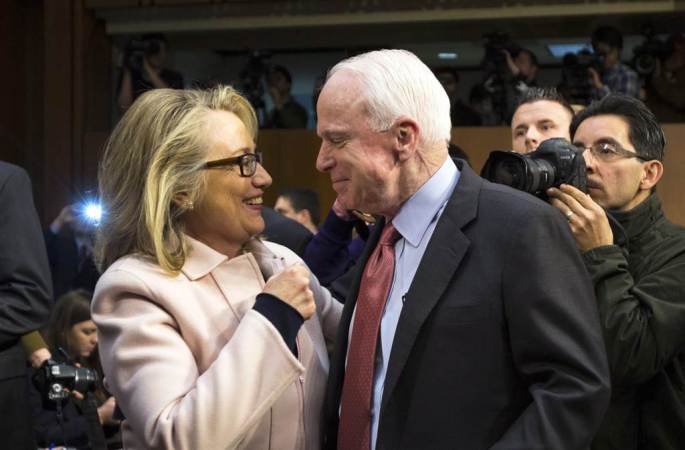