WASHINGTON, D.C.– President Donald Trump on Thursday called for the arming of school officials in the wake of last week’s Florida school shooting during which 18 students were reportedly killed.

Responding to criticism he received the day before after suggesting that teachers should be trained in the use of a firearm, the president said that well-armed staff may prevent such tragedies in the future.

“I never said ‘give teachers guns’ like was stated on Fake News @CNN & @NBC”, the president tweeted (https://tinyurl.com/yc3m6jaf). “What I said was to look at the possibility of giving ‘concealed guns to gun adept teachers with military or special training experience- only the best.”

“20% of teachers, a lot, would now be able to immediately fire back if a savage sicko came to a school with bad intentions. Highly trained teachers would also serve as a deterrent to the cowards that do this. Far more assets at much less cost than guards,” Trump continued. “A ‘gun free’ school is a magnet for bad people. ATTACKS WOULD END!”

The president’s comments followed a gathering at the White House Wednesday in which he was joined by students, parents, and teachers affected by the Parkland, Fla., high school shooting. Parents affected by the Sandy Hook and Columbine massacres were also invited to attend.

After asking the parents for their feedback, one father suggested the possibility of arming teachers, an idea that the president openly embraced. After discussing the suggestion at length, the president said his administration would be looking “very closely” into the option.

The president also on Thursday announced plans to ban bump stocks, gun modifiers that enable semi-automatic firearms to fire more quickly. In addition, he spoke of plans to raise the age requirement to buy a gun from 18 to 21 and called for stricter background checks.

“I will be strongly pushing Comprehensive Background Checks with an emphasis on Mental Health,” he announced on Twitter. “Raise age to 21 and end sale of Bump Stocks! Congress is in a mood to finally do something on this issue—I hope!” 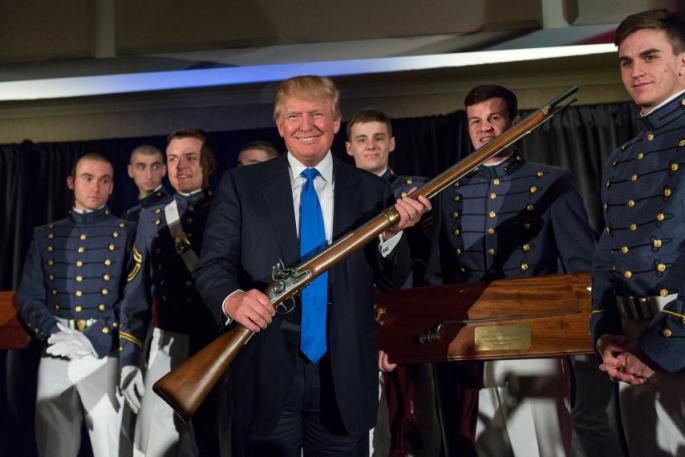