WASHINGTON, D.C. — President Donald Trump came out swinging against former Democratic presidential rival Hillary Clinton on Wednesday over recent revelations that
her campaign helped to fund a vicious anti-Trump dossier during the height of the 2016 presidential election.

Calling the dossier a “disgrace” the president said the tables had turned on Democrats over what he referred to as the “Russia hoax.”

“They’re embarrassed by it, but I think it’s a disgrace,” Trump told a sea of waiting reporters, before heading to Texas for a briefing on Hurricane Harvey recovery efforts.

The quickly discredited report about the president was released just weeks prior to the November election and claimed that Trump had been filmed with prostitutes in a Moscow hotel.

The funding behind the effort was revealed on Tuesday after documents published by CNN revealed that political consulting firm Fusion GPS was retained last year by Marc E. Elias, an attorney representing the Democratic National Committee and the Hillary Clinton campaign (http://cdn.cnn.com/cnn/2017/images/10/25/fusion.perkins.coie.pdf). The documents had been obtained as part of the FBI’s ongoing investigation into Russian meddling in the 2016 presidential election.

The Washinton Post, who was first to report the connection between the dossier and the Clinton campaign (https://www.washingtonpost.com/amphtml/world/national-security/clinton-campaign-dnc-paid-for-research-that-led-to-russia-dossier/2017/10/24/226fabf0-b8e4-11e7-a908-a3470754bbb9_story.html) revealed that a former British intelligence officer helped to orchestrate the scandal.

“Marc E. Elias, a lawyer representing the Clinton campaign and the DNC, retained Fusion GPS, a Washington firm, to conduct the research,” said the WaPo report. “After that, Fusion GPS hired dossier author Christopher Steele, a former British intelligence officer with ties to the FBI and the U.S. intelligence community, according to those people, who spoke on the condition of anonymity.”

“The whole Russia thing … this was the Democrats coming up with an excuse for losing the election,” Trump said. “They lost it and they lost it very badly. And they didn’t know what to say, so they made up the whole Russia hoax.”

“Now it’s turning out that the hoax is turned around, and you look at what’s happened with Russia and the uranium deal and the fake dossier, and it’s all turned around,” he added, referencing recent revelations on the Obama administration’s 2010 approval of a Canadian mining company’s sale to a Russian firm that gave them substantial control of U.S. uranium reserves.

“I think the uranium sale to Russia and the way it was done, so underhanded with tremendous amounts of money being passed, I actually think that’s Watergate, modern age,” Trump said. 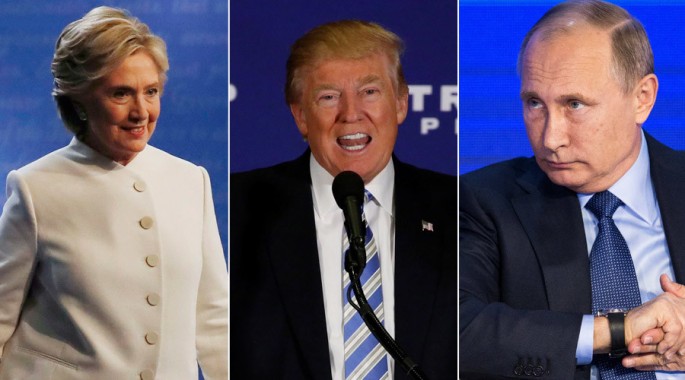