PYONGYANG, NORTH KOREA — North Korea on Tuesday conducted a mass live-fire drill that reportedly involved up to 400 artillery pieces under the supervision of leader, Kim Jong Un. The drill is just the latest indication that the rogue state is preparing to launch a preemptive strike against the U.S., say military experts.

The drill comes on the heels of the approach of a nuclear-powered American submarine that is currently barreling toward the region.

As reported on Monday, the entire U.S. Senate has been called to the White House for an emergency briefing of the conflict (https://rebekahworsham.org/2017/04/24/brink-of-war-entire-senate-called-to-white-house-for-briefing-on-north-korea-as-rogue-state-warns-of-preemptive-strike/).

According to White House press secretary Sean Spicer, Secretary of State Rex Tillerson, Secretary of Defense Jim Mattis, Chairman of the Joint Chiefs of Staff Gen. Joseph Dunford and Director of National Intelligence Dan Coats are have cleared their schedule in order to update members of the Senate on the latest developments.

Meanwhile, China president Xi Jinping has warned Kim Jong Un that should war break out between the United States and North Korea, it will be Korea that suffers most.

In an editorial piece for the Global Times, a publication that is widely regarded as the official news source of the Communist Party, Chinese government officials wrote: “The game of chicken between Washington and Pyongyang has come to a breaking point.”

The warning continued that “it is more likely than ever that the situation will cross the point of no return” and that “all stakeholders will bear the consequences, with Pyongyang sure to suffer the greatest losses.”

Lu Kang, spokesperson for the Chinese foreign ministry, urged Kim Jung un to find a peaceful solution to the conflict before “it is too late”.

“The current situation on the Korean Peninsula is complicated and sensitive and the tension is high,” said Kang.“We urge all sides concerned to keep restrained and calm and refrain from taking actions that could escalate tensions.”

The aid of the Chinese government comes just weeks after president Donald Trump met with Xi Jinping and essentially told him that destruction of the United States was not in China’s best interests. “If we go down, our debt to you and the trillions that you make from us in foreign trade goes down with us,” Trump reportedly told Jinping.

Despite warnings from their Chinese neighbors, North Korea has seemingly remained defiant.

“There is no limit to the strike power of the People’s Army armed with our style of cutting-edge military equipment including various precision and miniaturised nuclear weapons and submarine-launched ballistic missiles,” a government spokesperson said in a statement on Tuesday to a Pyongyang-based newspaper (https://www.rte.ie/news/2017/0425/870024-donald-trump-wants-tougher-new-sanctions-on-north-korea/).

Trump on Tuesday said that “one way or another” North Korea’s nuclear weapons program must be stopped.

“North Korea is a big world problem,” said the president, “and it’s a problem we have to finally solve.” 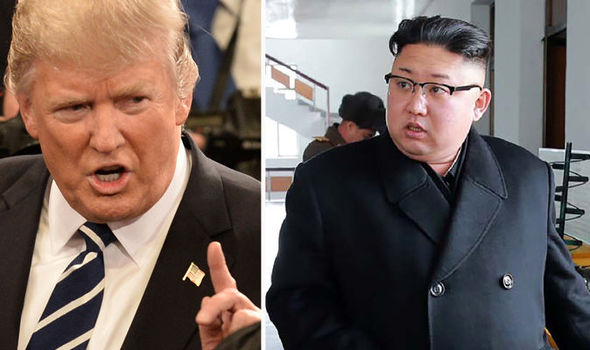